July 23, 2012
One of the grim proving grounds for the would-be agile business analyst (henceforth "WBABA")  is the "traceability conversation."  Eventually, you will have to have one.  You may have seen one already.  If you haven't, you may want to half-avert your eyes as you read further.  It gets a little brutal.  But if you close them all the way, you can't read.
Dialogue:


WBABA:   ...so in summary, we complete analysis on each story card, and then we support the developers as they build it that same iteration!

Corporate Standards Guy:  but how do you do traceability in agile?  You have to have traceability.  It's broadly recognized as an important factor in building rigorous software systems. These software systems permeate our society and we must entrust them with lives of everyday people on a daily basis. [The last two sentences are an actual quotation from the Center of Excellence for Software Traceability website!]

Corporate Standards Guy: right.  Well, go ahead and do your little story cards, but I expect that before you start papering the war room wall in Post-It note chartreuse, you will present me with a full Business Requirements Document and Functional Requirements Document, so you can trace everything through to the Systems Architectural Diagram and on into the test cases.  Show me the traceability matrix, and we're all good. 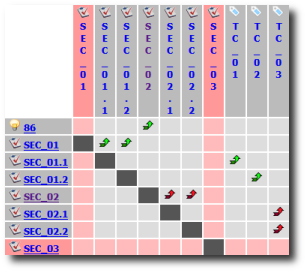 It appears as though someone has thrown a wrench into the speedy agile SDLC which will kill it altogether, or at least blow out its kneecap.

But have no fear!  Unlike "pair programming," a sadly controversial practice in which the debate could go either way on any given day, "traceability" is ground on which you can beat Corporate Standards Guy down ANY day, hoisting him with his own petard!  How?  Why?  Because...agile is actually better at traceability than waterfall.  Embrace the dark side and let's take a look at that.

What is Traceability and Why Does it Matter?

All Center of Excellence hyperbole aside, "traceability" could be factually described as "the use of tracking and tracing systems and processes to match the incoming product requirements to outgoing product attributes."  Why would you want to do that?  Typically three positive reasons, and one negative one.

Positively:
Negatively:
Why Agile is Better than Waterfall at Traceability

The best way to put this is that where waterfall is a translation process, agile is a refinement process.

Suddenly, the pepperoni has a seat at the monitor.  In which language did the customer get throttled by his own pizza?  We don't know now, but give us a traceability matrix showing word for word translations at each step, and we'll figure it out.

"That's absurd!" you say.  But is it absurd?  How does a customer follow the requirements inventory as it progresses through the development life cycle?  Would elements written in Haitian Creole be any harder for her to understand than page 37 of the Functional Requirements Document?

Refinement:  In an agile process, requirements are refined in place, not translated.  In fact, for purposes of forward and backward traceability, you literally build out a requirements matrix from the beginning, and develop in a way that keeps traceability intact.  What is this matrix?  In agile, it is called "the backlog."  Each backlog item (called "a story") is a description of a piece of business functionality which the system will provide, described from the point of view of a person doing something in particular with the software.  So these steps look more like this:
Note that as we go, traceability doesn't need to be maintained as a separate activity, because each system feature is being built out from general description into detailed implementation, and okayed as "complete" when it meets pre-agreed acceptance criteria, and the customer herself nodding in agreement.  If requirements need to change, new stories would be introduced to override behavior not needed any more on the page (for example, sales of Spam and pineapple might be lower than expected), and through grouping in the requirements repository, stories related to the drop-down could be viewed in sequential order, to show that first one thing was implemented, then another.

Fans of the classic Frances Hodgeson Burnett story for girls, The Little Princess, will remember the point in that book where Sara Crewe tries to explain to the evil Miss Minchin that she doesn't need to learn French.  Miss Minchin overrides her and gives Sarah a basic vocabulary book so she can get started.  When the French master arrives at the school, she conducts a lengthy conversation with him--in French--and he exclaims, "Madame, Sarah does not need to learn French because she IS French!"

Popular posts from this blog

December 13, 2012
I'm pretty sure my few remaining friends in the "small, collocated team agile" community are going to desert me after this, but I actually have a checklist of 10 things to think about if you're a product owner at a big company thinking of trying out some agile today.  Some of these might even apply to you if you're in a smaller place.  So at the risk of inciting an anti-checklist riot (I'm sorry, Pez!), I am putting this out there in case it is helpful to someone else. From http://www.yogawithjohn.com/tag/yoga-class/ Here's what you should think about: 1.        Your staffing pattern.  A full agile project requires that you have the full team engaged for the whole duration of the project at the right ratios.  So as you provision the project, check to see whether you can arrange this staffing pattern.  If not, you will encounter risks because of missing people.  Concretely it means that: a.        You need your user experience people (if a
11 comments
Read more

July 27, 2018
If you are a current or recovering Business Analyst, you may remember Scott Ambler's assertion in his essay " Rethinking the Role of Business Analyst :" A business analyst (BA) is a poor substitute for developers who have both ready access to actual stakeholders and agile modeling skills.   Remember, BA is also the abbreviation for band-aid. Image courtesy of target.com I have friends who switched to Curad for their fabric bandage needs, they were so annoyed by Ambler's witticism, even though Curad never had the mysterious tiny round bandages that don't do anything, but you feel incomplete without them. In the past, business analysts were always first to go, when a company decided to institute an "agile" policy where everyone on all teams would get called a "developer," supposedly because everyone on the team could do everything needed, but generally because everyone on the team was, in fact, a developer. Often times, the next step
Post a Comment
Read more

October 14, 2010
Many agile teams have never seen a business case, ever, and they may even be proud of it. Our mantra is that we deliver "business value," not just "software," quicker, better, and faster, but if so, we certainly don't spend a lot of time reporting on value delivery, and in fact we may be scornful about "analysis paralysis."  As software developers, we consider ourselves to be doing quite well if we can deliver the software every two weeks (or continuously).  And this is particularly if we've enabled this frequent high-quality delivery through automated testing and automated build-and-release techniques.  We've reduced business risk by making results visible more often, and allowing the business to change direction more frequently.  We assert that along the way of course we're also delivering value.  But how would we prove it? I've recently posited that we shouldn't even think of doing agile projects without capturing and recordi
2 comments
Read more